In this website we use cookies to improve your experience, by analyzing your browsing on the website. If you continue to browse, we deem that you accept its use. For more information or to know how to change the settings of our cookies policy.
Ok More information
Timor-Leste | 2018.03.07
TIMOR-LESTE AND AUSTRALIA SIGN LANDMARK MARITIME BOUNDARY TREATY

Yesterday, 6 March 2018, at 5 pm in New York, the “Treaty Between Australia and the Democratic Republic of Timor-Leste Establishing their Maritime Boundaries in the Timor Sea” (the “Maritime Boundary Treaty”) was signed before the United Nations’ Secretary-General, the Honorable António Guterres.

The Maritime Boundary Treaty is a major breakthrough in the relations between the two States, and was an outcome of the Compulsory Conciliation process initiated by Timor-Leste in April 2016 under Section 2, of Annex V, of the United Nations’ Convention on the Law of the Sea. After decades of discussion and dispute this important boundary has finally been delimited, thus reinforcing Timor-Leste’s political and economic sovereignty. The Joint Petroleum Development Area (“JPDA”) previously in force under the Timor Sea Treaty will be dissolved as soon as the Maritime Boundary Treaty is ratified and enters into force. 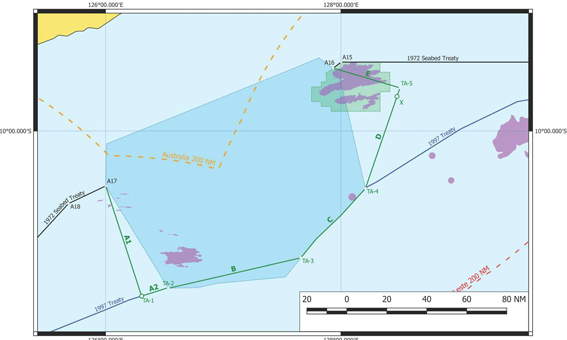 As to the maritime boundary lines (depicted above), this new Treaty follows roughly the Southern boundary of the JPDA (the median line between the opposing coasts of the two States), being aligned with Timor-Leste’s public claims to a median line approach to settling the dispute. As to the area previously known as the “JPDA laterals”, Timor-Leste has also obtained significant concessions from Australia, with the Eastern lateral line now passing to the East of the Greater Sunrise natural gas fields, before cutting Northwest and bisecting part of the petroleum deposits. There is also an improvement to Timor-Leste’s position on the Western lateral, with the inclusion of the Buffalo oilfield in the area of Timor-Leste exclusive sovereignty. Portions of the Eastern and Western lateral are subject to further future adjustment once certain events take place.

The Greater Sunrise natural gas fields – one of the main points of contention between the two States – will be, until commercial depletion of the resources, subject to a “ring-fenced” “Greater Sunrise Special Regime Area” (“Special Regime Area”) governed by Annex B of the Treaty. Within the Special Regime Area, which corresponds to the area previously delimited in the International Unitisation Agreement, “the Parties shall jointly exercise their rights as coastal States pursuant to Article 77 of the Convention”.

Upstream revenue from the fields shall be shared between Timor-Leste and Australia according to the following formula:

The scheme for upstream taxation of Greater Sunrise is to be agreed between the States and the oil companies currently holding rights over the fields, while downstream taxation shall apply exclusively on the basis of the location of the natural gas liquefaction facility. Finally, Timor-Leste taxation shall apply to all other activities related to the exploitation and development of Petroleum in the Special Regime Area.

In order to harmonize the legal framework applicable to Greater Sunrise, the current titles (two Australian retention leases, and two JPDA Production Sharing Contracts) will be converted into one single production sharing contract. The applicable regulatory framework will also be harmonized. In practice, this means that the dual regulatory framework hitherto applicable will be replaced by a single Special Regime Area framework.

The regulatory structure foresees that the Timor-Leste Autoridade Nacional do Petróleo e Minerais (“ANPM”) will act as day-to-day regulator, while a new Governance Board will be created to oversee the petroleum activities. The Governance Board is comprised of two representatives from Timor-Leste and one from Australia (an inversion of the rule for the previous Sunrise Commission created under the Timor Sea Treaty) will also have powers to make certain key decisions in respect of the Special Regime Area.  A main innovation of the new framework is the creation of a Dispute Resolution Committee, with limited powers to resolve certain disputes relating to the Special Regime Area and the development of Greater Sunrise. This Committee is comprised of one representative appointed by each State, and an independent Chairman.

This is an important shift from the prior Timor Sea Treaty and International Unitisation Agreement regime, insofar as the new criteria give a greater weight to the development policy, objectives and needs of Timor-Leste, while the criteria for the oil companies is for a “fair return” on investment. The new wording may be seen as an acceptance of the most recent principles on “social license to operate”, according to which private companies must ensure that their projects effectively contribute to the development of local populations in order to be socially acceptable and sustainable in the long run.

Finally, Annex B of the Treaty also contains a series of important provisions aimed at allowing for full transparency of operations and cooperation between Timor-Leste and Australia in areas such as auditing and inspection, customs and immigration, quarantine, and vessels, amongst others. These provisions are aimed at removing some of the barriers that existed under the Timor Sea Treaty regime, and which contributed to the insufficient sharing of benefits to Timor-Leste.

Annex D to the Treaty contains important rules on the transitioning of jurisdiction over other Petroleum fields (existing in the JPDA or in Australian jurisdiction) as a result of the final delimitation of the maritime boundaries. These fields are:

The transitional regime in respect of the fields identified in (i) through (iii) above basically foresees the grandfathering of existing regulations and production sharing contracts, with the necessary adaptions required to transition the fields to the exclusive jurisdiction and supervision of Timor-Leste. In turn, the Buffalo oilfield will be subject to a new production sharing contract to be negotiated and entered into between the Contractor and Timor-Leste, on “conditions equivalent” to those previously in force.

It is expected that the final delimitation of the maritime boundaries effected by the Treaty will allow Timor-Leste to open up new areas for oil & gas exploration in the areas previously covered by the JPDA and Australian jurisdiction, some of which have proven oil & gas potential and/or significant potential. The last licensing round in the Timor Sea was held in 2006, and new exploration has essentially been stalled in recent years.

The two States will now proceed to implement their necessary internal steps for ratification of the Maritime Boundary Treaty. In the case of Timor-Leste, such is expected to take place after the Parliamentary Elections scheduled for 12 May 2018.